There is something a little up with my plates of meat, and for those of you who aren’t familiar with cockney rhyming slang Plates of Meat= Feet, as I seem to be getting incredibly itchy feet and they are getting very sweaty a lot of the time. Seems highly localised to my feet so I am not sure what is the cause, I haven’t changed washing powder or shower gel. Perhaps it is Psoriasis playing up as they are a little Singing Detective. If you don’t like feet or have a foot fetish the photo may be uncomfortable for you, unless you have Tarantino style foot fetish then this may be your lucky day… hey I’m not judging 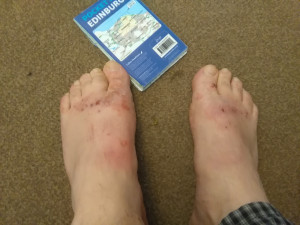 Some definite cracking there, I wonder if I still have that bottle of Aloe Vera somewhere, Aloe Vera was recommended to me by a lesbian dolphin killer’s girlfriend in Margarita, but that is another story.

Last Thursday was A Level results day and my teacher friend was relieved to see that the majority of her classes passed with good grades. Later on I went to her place to celebrate a job well done and she let slip a few of her naughtier ideas… without going into graphic details it involved her desk at school.

I haven’t listen to anymore of Kaldor City this week but I’ll probably do a double bill later on and treat it like a two part series finale, the final two plays are called Checkmate and Storm Mine, the former probably is carrying on from the chess theme to Taron Kapal and the later suggests a return to the location of The Robots of Death. 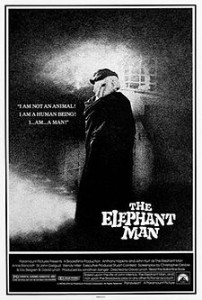 Sunday Night I watched David Lynch’s probably most accessible film, The Elephant Man, which features a cartload of British actors including Micheal Elphick, Freddie Jones, John Gielgud, Anthony Hopkins and of course John Hurt as the titular John Merrick. It’s shot Black and White and while it has a few of Lynch’s trademark surreal imagery it is mostly done in an almost documentary style. John Hurt gives a tremendous performance as the deformed man in what essentially a masked role and gives dignity to a character who Victorian society gave none to. Anthony Perkins excels as the kindly, if occasionally suspect, physician who is assigned to look after John Merrick and Freddie Jones is superb as the sadistic freak show owner in a turn which a twisted version of his usual comic roles. It is a very sad film in many ways and the ending is incredibly bittersweet as John Merrick unwittingly ends his own life trying to sleep like a regular person. 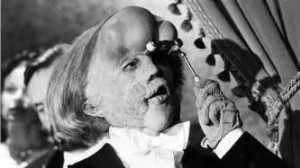 Starting reading Salem’s Lot by Stephen King and To Be or Not to Bop which is the autobiography of Bebop Trumpet pioneer John Birks “Dizzy” Gillespie which will be an interesting read as he had a long career and hopefully some insights on working with Charlie Parker.

This weekend it is the monthly gig by the Severnside Jazz Band at the Four Crosses in Bicton, which hopefully will be guesting John Penn on keys but a disclaimer on the Facebook page suggest he may be unable to attend. Perhaps I should ask Mike Yorke to slip them John Evans number…

I think there might be some Jazz on Thursday at the Boycott Arms courtesy of The Chase Jazzmen, but I’m not 100% sure.

Hey Mr Tambourine Man… Shut up!
MacArthur’s Park is melting in the dark ,All the sweet, green icing flowing down
Someone left the cake out in the rain ,I don’t think that I can take it
‘Cause it took so long to bake it, And I’ll never have that recipe again
Oh…. Bugger

Didn’t we have a lovely time the day we went to Bangor…. not really, she wasn’t in.