Sunday the 12th of November marked the getaway part of my ten day break from work and my destination was the small Yorkshire town of Holmfirth, which is just on the outskirts of the Yorkshire Pennines and it an interesting mix of old brickwork buildings and more modern redevelopments.

Knowing that I was going to be walking about and a bit and that it was November, I of course dug out my waterproof jackets and trousers, plus a fleece, a Dalek scarf and my awesome Hataclava for the walking, and off course a good sturdy pair of walking boots. I set off about half past four after a few false starts and ended up stuck in traffic on the M54 for 30 minutes… because as is the usual practice no traffic information is given until you’ve passed the last detour point. However once past the jam it was relatively plain sailing all the way up to Yorkshire and the Sat-Nav then gave me some interesting directions to where I was heading, lots of country lanes which no doubt would look impressive in daylight, but not some much at night. I was staying in a small pub called The White Horse Inn in the small village of Jackson Bridge and is a lovely little pub and was used as a location in a certain long running sitcom. I was checked in by a delightful blonde young lady and I quickly dropped my stuff off in my room and I made my way to the bar, of course, there was a selection of four real ales: Leeds Pale Ale, Tetley’s, Black Sheep Best Bitter and Farmer’s Blonde. I started off with a pint of the Farmer’s Blonde which was about 4% abv and was a very nice ale and would become a semi-staple of my stay. I a quick chat with the few locals who were out for Sunday night drinks before trying both the Leeds Pale ale, followed by the Tetley’s. Black Sheep Best is a beer I am very familiar with as it was the resident ale at the Horseshoe’s at Uckington when Daron and Dawn took it over way back in 2007, so I did not indulge in that one but I did have a Tetley’s as I haven’t had the cask variation for years, most places who do it Shropshire do the ‘orrible smoothflow variation (seriously, what idiot gets a nice bitter and thinks “What this needs is some Nitrogen in it”????). I decided to retire around 9 o’clock and was vary surprised to discover that unlike in Telford, there are Public Buses in the evening on a Sunday in the area.

My room was pretty nice, it was a twin room with a nice chest of drawers and a good bedside table to put my book on. In a rather unusual touch my room had two sets of golf clubs propped up against the window, I’m not sure if they were fully functional or not, but I suspect it was a nod to The Kink in Foggy’s Niblick as adorned on the bedroom wall were a number of photos of Cleggy, Foggy and Compo and one of Wally Batty and Sid. 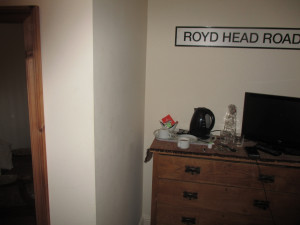 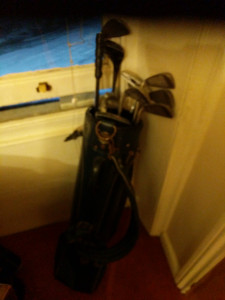 This tied in with the décor of the rest of the Pub, which was adorned with props and photos evenly spread around the bar area which included Cleggy’s Clock, Marina’s Jewellery and Nora’s Clock.

Breakfast was between 8:30 and 9 and I indulged in a full English breakfast complete with Black Pudding and Fried Egg and a nice pot of tea. Breakfast was served by a delightful dark haired young lady who somehow managed to be chipper that time in the morning. I don’t knock how these people do it, I’m not even vaguely human until around 10am and a third cup of tea and even then I would wager that some people would say the Jury is out on that one. After breakfast I set up my plans for the day which was to have a wonder around Holmfirth itself. I did toy with walking up to Holmfirth which was would be a 50 odd minute walk which while not a problem in itself did limit my scope for the rest of the day so I drove up to town.

The Town is a nice little place and is full of lots of nooks and crannies to gander in and a huge amount of cafes and bars. I made a brief visit to the Maythorne Cross which was just next to the carpark by the Co-Op. The Cross itself dates back to the 15th century and it seems it has a bit of a history of being moved about a bit and is believed to have been a directional marker on an old salt route, the majority of the cross is a replica as only the base remains of the original. 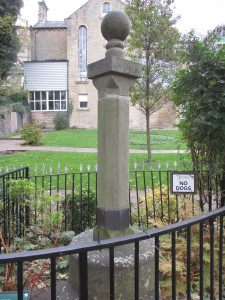 I had a quick walk around and called in on a small bookshop a little off the main road and not too far from Sid’s Café. It was a nice little second had store with most of the books in very good condition and I purchased a Miss Marple collection for the sum of £1.50. I then went and located Nora Batty’s apartment and Compo’s apartment which are a part of the a Summer Wine museum which, as of often is the case this time of year, is only open at weekends. Oh well, part of the location is also the Wrinkled Stockings café but I went with my gut and retreated up town for a coffee in Sid’s Café. Sid’s Café is again a famous location used in the sitcom and the interior is a fairly faithful recreation though the kitchen part is in a different location to the original (which was original shot in a studio). Various bits of memorabilia are available for purchase though I did not indulge, I settled for a nice Latte and made plans for the afternoon.

2 thoughts on “The Summer Wino Tour: Part One”