I woke about 8:15 and did my usual morning ablutions and popped down for breakfast about quarter to nine. I had a bowl of cereal and again indulged in a full English Breakfast but this time opted for my Eggs to be Scrambled and had a nice pot of Early Grey to wash it down with. Breakfast done and dusted I looked up walks to do today. I did contemplate doing the full Holmfirth walk which was about 20 miles and would have taken the best part of the day to complete and since it looked like rain and fog I decided against it. I looked up walks and settled on the Ramsden Reservoir walk which was a couple of miles to do and was about 25 minutes drive away. Noting the weather I made some proper preparations loaded my backpack with waterproof trousers, walking boots, a fleece and a waterproof jacket. I prepped myself a flask of tea and popped up to the local shop to get a few soft drinks for the walk as well. The shop wasn’t far from the White Horse Inn but the road up to the shop is very steep and was something of a walk in itself and there was a corner with no footpath which while walking up was a bit of a blind spot. All supplied up for the walk I got into the motor and drove up to the Reservoir, as I approached the car park a lot of low lying fog was around the area and there was a sign declaring that the bridge to complete the bridge was closed. Changing into my hiking attire complete with my awesome Gregory Porter hat I started off on the initial walk. 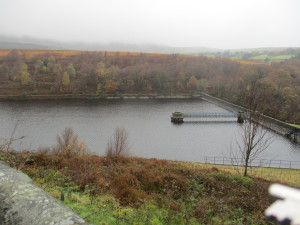 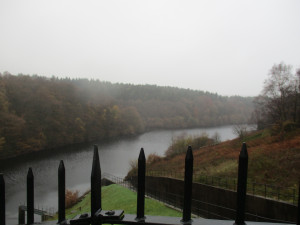 It started raining just as I set out, (typical eh?), and I made my way across the damn to the woodland area which was fairly steep and had a lot of roots, plus the soil seemed a bit loose so concerned about there being heavy rain fall and tumbling tail over tip on my way back, I ventured back upon myself and went on an alternative walk which would be more beneficial as it would give me more views of the rolling Yorkshire hills. I wandered up a very muddy back and somehow managed to not get my feet caked in mud, I felt quite impressed, I crossed a stone wall proceeded a few feet and this happened: 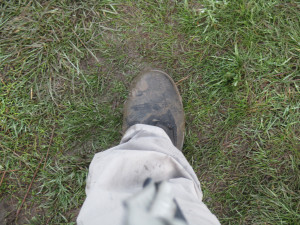 So much for not getting caked in mud! Slightly to the left was not solid at all. Ah well. I went on and took in the scenery, the mist was listing and the rain was a little one and off but it was a pleasant walk. After a while the footpath dipped into a small hill which was a little bit of a climb to get down and I continued on past some old farm buildings, the sort frequented by our favourite Yorkshire Senior Citizen trio in various episodes, especially in the early seasons. I noted here that I was getting a way from the car park but I could always retrace my steps if needed. I walked on a little further and took a few more photos and found myself approaching a working farm. There was a style suggesting I could walk through, but it took a helpful farm aid to point me in the direction of the rest of the path. I was now walking into a village which viewers of Summer Wine would recognise as being the backdrop to where Wesley’s shed is (oh you won’t find the shed, it was a prop). I met a friendly dog walker who gave me a circular direction to return to the car. 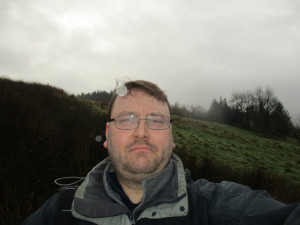 I walked into the village and arrived by the school and walked down to the church (which might have been the one featured in the funeral scenes in Getting Sam Home) and followed the road back to the car park. It was a relatively quite road and en route I passed another dam which looked quite impressive, however low lying mist takes it out the photo. 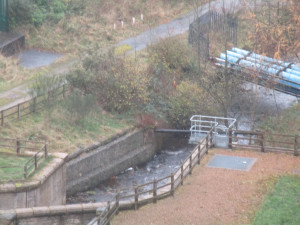 I returned to the car, changed my footwear and had a red hot cup of tea from my Thermos and planned the rest of my day.