Following on from my post in which I was Larkin about different types of Jazz and it’s critics I went and purchased All What Jazz by Philip Larkin, which is a collection of Jazz criticism from 1961-1971 mostly written for The Daily Torygraph- sorry Telegraph. 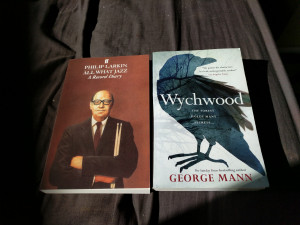 I have also started Wychwood by George Mann, writer of the Ghost and Newbury & Hobbes ranges, which is a serial killer thriller set very firmly in the real world albeit with a folklore background.
After work on Friday I watched a 1960 film called Watch Your Stern which stars Leslie Philips as a bumbling Naval Officer, Kenneth Conner as an accident prone Rating and a bearded Sid James as a Chief Petty Officer. Now despite the presence of Joan Simms and Hattie Jacques it is very difficult to not think of the film as a big screen adaption of the Navy Lark! It’s an amusing film in which some top secret plans are accidentally set alight and our bumbling Naval heroes need to find a replacement before the Admiral arrives. Watch out for cameos by Eric Skyes, Spike Milligan and Kenneth J Warren. Not quite Laughs Ahoy! But it raised quite a few smiles.
Music wise I have got around to listening to Bat Out of Hell 3: The Monster’s Loose and I am sad to say it is distinctly average on the whole. It opens well with the quite heavy title track “The Monster’s Loose”, but rapidly becomes more average and pretty much follows Meatloaf clichés, funnily enough I couldn’t tell you a track from the album before I’d listened to it while Bat 1 and 2 and Welcome to the Neighbourhood had some successful hits such as Bat Out of Hell, Dead Ringer for Love, I Will Do Anything for Love, Rock and Roll Dreams Come Through, I’d Lie for You and That’s the Truth and Not A Dry Eye in the House. Personally I think Neighbourhood is the superior album with many classic tracks such as Martha and Original Sin. On the whole Bat Out of Hell 3 gets a distinctly average 3 out of 5 as it distinctly unmemorable.
Feeling in a bit of a comic mood I went out and bought two volumes of Goon Show Classics: Volume 31: The Starlings and Volume 32: The Scarlet Caspsule. The titular episode on the first set is an unusual one for a 1950s radio comedy in that it was performed without an audience and no musicians thanks to a strike- Spike Milligan himself stated it a personal favourite. The Scarlet Capsule is a pastiche of Quatermass and the Pit, the serial which gripped and terrified the TV audiences of 1959.