Well I am lying on my bed lying as Pip would put it, the wrong way round (switching position ever few weeks eases my back issues), contemplating things. Like “if ears were square, would the corners cut your pillow open?” Major philosophical points as you can tell…

Friday afternoon I went to the Cinema to see the movie Rampage which stars Dwayne Johnson (aka the Rock) and a host of unmemorable others. Johnson is clearly doing an Arnie in that he is trying to change his image from just being a muscle man and playing some lighter and sometimes satirical roles, this role fits somewhere in between those particular tropes. Unfortunately, the film is some what derivative and is pure B-Movie, it is basically a monster mash up film. King Kong vs Godzilla vs a big ass Wolf. The basic plot is that Dwayne Johnson, a Conservationist who is looking after endangered animals and rescuing them from poachers, has one of his favourite animals: an Albino Gorilla named George (who lives in a Jungle) gets infected with a virus which causes him to grow in size and strength and make him more aggressive and Johnson wants to cure him. There’s an evil lady scientist who wants to use this virus for…. reasons. The main reason being she’s an evil scientist and that is what they do… She has her bumbling assistant who’s performance has to be seen to be believed it sooooo hammy, he must have read the script and realised it was a garbage B-Movie and tailored his performance suit.
Other then George the Gorilla, the only other character of any note is a special Ops operative called Russell, who is a smarmy git but an entertaining character who while dubious is one of the good guys.
Basically two other animals get infected with this virus when two samples of it make it through the atmosphere after a space station blows up after being ransacked by a test subject of said virus. Now the problem here is that I can just about accept our villain designed the canisters to survive re-entry from space (as the experiments are illegal in nature) but it kind of reeks of something lost in rewrites. Surely if they were designed to survive re-entry then the plan was to blow up the space station as that would get rid of any witnesses, but no this seems to be an afterthought, well that or some in production pointed out that the canisters would burn up in re-entry and thus the Terrance Dicks school of “quick cover it with a line” script editing stepped in. Also it is clear that the writers haven’t thought it through… when the various canisters of virus are found by wandering animals it is virtually after they have impacted, to crib Herr De Florence in “Silver Nemesis” do they not know how hot they will be. Even the canister which lands in water wouldn’t cool down to handling temperature and I notice there was a total lack of steam or bubbling water as it impacted. Anyway there is a somewhat pointless set of sequences with evil scientist lady hiring a mercenary to bring back the infected Wolf dead or alive and basically everyone in that sequence is killed and all it seems to do is establish “it’s a big wolf”, it reeks of Sawardism and feels like there should have been more of a pay off. Oh yes and the virus makes the rampaging animals resistant to bullets and missiles…. but not to big metal poles or each other. A lot of the action seems to happen because the story requires it to happen rather a fluid logical progression (and it would be an easy fix… all three creatures get a dollop of antidote and therefore are merely just big versions of said species and thus not longer have magic invincibility and can be disposed of). Essentially the movie is a series of set pieces loosely linked together by a plot and when the only likable characters are Dwight Johnson, a smarmy black ops guy and a Gorilla fluent in sign-language you know your movie isn’t great. Oh yes I forgot to mention, the third infected creature is an Alligator… I wonder if this is down to rights issues with King Kong and Godzilla. The dialogue is frequently trite and I am not sure if that was deliberate or not, or if Chris Chibnall wrote the screenplay under a pen-name (while there aren’t lines such as ‘Have you ever cum so hard you forgot who you were?’ or ‘there is a dog pissing on the tent, hold me’ we do have a Gorilla using playground sign language to suggest sex). In short the movie is something of a mess, the CGI monsters attacking the city are supposed to make you go Wow! but instead made me fondly remember the 1925 movie the Lost World with its stop motion dinosaurs and then think…. actually the Dinosaurs in Invasion of the Dinosaurs weren’t that bad after all, even if the T-Rex doesn’t roar but actually says “Roar!”
The Bottom Line: A mess of a movie but some good action pieces, ultimately though the negative aspects out number the positive so a verdict of a lowly 4/10 from the Sandman.

Thursday I made my weekly trip to the Kynn to catch up on gossip…. Gordon Bennett, if I submitted some of the stuff going on there to a soap opera producer I would be laughed out of the office for being too unbelievable.

A week on Friday at the Down Inn we are hosting the opening gig of the Bridgnorth Jazz festival in our function room, which is nice. I, being an honest man and knowing Jazz isn’t everyone’s cup of tea, thought I would take one for the team and have offered to do the bar for gig and absolutely nothing to do with getting to listen to some live Jazz while being paid. To make things better it isn’t just a local band but some long term professionals including reedsman Alan Barnes (not to be confused with the Big Finish writer of the same name), Enrico Tomasso on trumpet and vocalist Tina May. 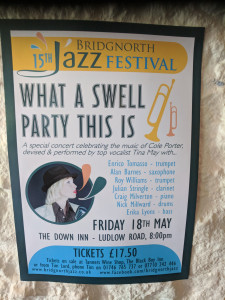 In Jazz terms I have recently made some purchases of albums by John Coltrane (Live at Birdland, Live at Newport ’63 and ’65, At Carnegie Hall with Thelonious Monk) and Sun Ra (a four classic albums set), which prompted a friend to ask “Don’t you have enough John Coltrane?”…. …. …

The Sun has mostly been shining for the past week and this has given the impression that the bottle has been cracked open and we are getting the first of the summer wine tastings.

I had a phone call from the BBC the other day (no, really) for a phone audition for a well known popular quiz show. I applied last year but missed the cut off for that series… I don’t think it went very well. Ah well nevermind, I had forgotten I had even applied so it’s not biggy and can’t remember what my specialist was, I think my specialist subjects I put down were the Works of Dennis Potter, the sitcom Red Dwarf and the music of Nat Gonella, you had to give three subjects. The audition was a general knowledge quiz which I might had answered better if I wasn’t hung over…

I was thinking of going to the Cinema tomorrow but save Avengers: Infinity War nothing really grabs me and I have been advised to re-watch a few Marvel movies before seeing it. I have been toying with the Guernsey Literary and Potato Peel Pie Society but I have a feeling that it is a date night movie not a film for a solo male.

It dawned on me this morning that Ben Dog is 9 this year. It seems like only yesterday that our big Ben was a little puppy whose ears and skin were too big for his puppy body and was terrified of bags.