Monday 18th June I decided to take young Heather out to see the Roman City at Wroxeter, this is the first time I have visited the actual site since I was a child despite it being just down the road from where I worked for 7 and a half years and a tiny bit further for a further 3. Silly how little you visit the places on your doorstep isn’t it?

Anyway, the city was the fourth largest Roman city in the UK and was almost the size of Pompeii and is perhaps most famous for it’s bath house. Most of which survives today are the foundations of the various buildings and a large wall which has signs to indicate how it was build in Roman times. The site also boasts a recreated Villa, the construction of which was televised in a documentary series called “Rome Wasn’t Built in a Day” and while it did attract a number of people to the venue, English Heritage made the fatal mistake of not opening during the week to the public and disappointing a number of visitors. On the plus side it meant we got a lot of extra trade at the Horseshoes.

Heather and I arrived around 11 o’clock and declined the audio tour which is a bit anti-social when you are taking your friend out for the day, plus I think it bad practice by the company as they could hire a tour guide and create a much more interactive experience, plus it creates jobs for people. The guidebook I imagine offers much the same information and has the advantage of being something you take home.

We were greeted by a smiling young lady who was very friendly and advised us to visit the exhibition before we entered the site; this gave a compressed history of the arrival of the Romans in Britain, the geology of the area and displays a number of artefacts that were uncovered in the area over the years and made for some interesting reading. 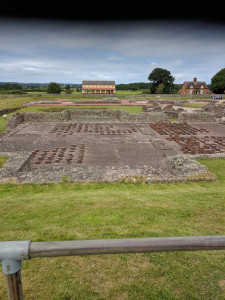 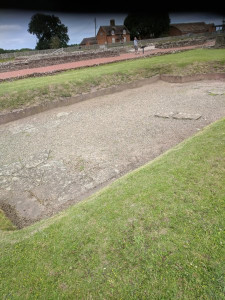 Once onto the site we discovered that the day was blighted by a terrible curse: a Primary School Trip!!! Lots of little swines dear sweet little darlings running around and screeching, so we decided not to visit the various points in order, more in a lets get out of the way of the kids as much as possible. There are various bits and pieces to the place and one of the main features was of course the Bath House which would have been an impressive building and was not just a place for washing but to socialise and exercise… so essentially the Roman version of going to the Gym. There was also a market place which would have been the epicentre of activity in the city, a few of the column bases survive. The population of the city is estimated to be 5000 people.

The reconstructed town house details what it would like for a normal everyday guy living in Roman Britain- though the effect was somewhat ruined by the presence of a very 21st century fire extinguisher! 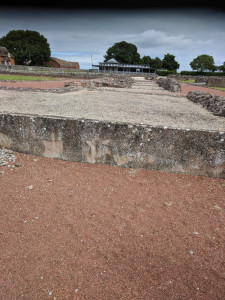 We ended with a brief trip to the gift shop in which Heather got in touch with her inner child and bought a bow and arrow (not with really arrows I hasten to add) after contemplating the purchase of a crossbow (both of these items I am fairly sure are anachronistic to the Romans I think, certainly the crossbow) and deciding not as it was rather expensive.

You can find out more about Wroxeter here

After the Roman City, we went on our way to Enginuity which is one of the Ironbridge Gorge museums and this one focuses on science and technology and is clearly aimed a little more at children but is great fun. It is a very much a hands on experience where the visitor can engage in practical experiments such moving a steam engine by hand using kinetic energy to generate electricity and demonstrate how much power is required to power various common household items such as a Hoover, Electric Fan and Stereo. It also things like deconstructed cars to show the workings of them. The main attraction for Heather though was the Fablab, which features a number of 3D Printers and they take on projects by the Public. Heather has a few projects in mind…. While visiting we decided to pay for the Ironbridge Gorge Museum passport, which was an upfront fee of £27 and gives unlimited access to all of the Museums for 12 months. 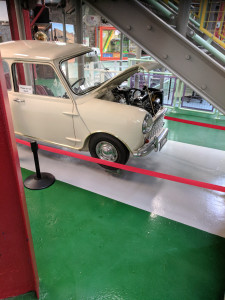 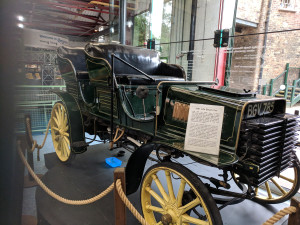 For more information about Enginuity

Once we were done at Enginuity, we went on to Pizza Hut for lunch which was fairly good and after dinner we bid farewell as I had work to attend.